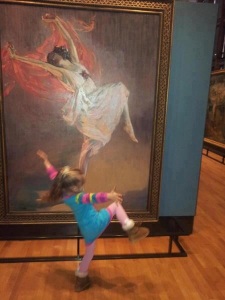 Drama is a perfect study for the middle school student as they enter the fourth phase of Piaget’s stages of development, the Formal Operational Period (Smith, 2012). Students at the age of 11 are starting to think about the world is way that is broader than themselves. They must think both abstractly, logically, and systematically; they begin to look outside of themselves and the surrounding world becomes palpable as their identity begins to blossom. These attributes are applied directly to the study of theatre and English. Both of these courses are text based. In my classroom I expect students to exercise their emerging ability to analyze a text and to connect their new knowledge to life-long lessons.
There are several important factors that the middle school educator must consider for their students. First, teachers must operate in a classroom that is filled with individuals. Each individual has been influenced by elements of nature and nurture as well as their gender (both internal and external). Second, teachers must operate in a classroom that is standardized. Each student must meet the objectives of the course, pass specific tests, and memorize the same material. The learner paradox that the teacher faces is inherent. Students must be simultaneously treated as both individuals and as a collective. This paradox can be accounted for as I create a classroom of differentiation. State learning standards are written with a degree of interpretation that I can take advantage of as a teacher. Because of this, students are able to work towards the standards in different ways; each student can build their path to knowledge and achievement. The practice solidifies my belief in a constructivist approach to learning. I intend to continue to use constructivism as a central modality for all my classes.

There are two central camps in the child development debate, The Nature Camp and the Nurture Camp. Those on the side of nature argue that all of development is pre-determined and the outcomes of character are set at birth. Those in favor of nurture posit that the outcome of a person’s character is primarily from the forces that one experiences as they go through life. However, this relationship is far too binary. There are traits that people are born with, sexual orientation for example, and traits that develop over time, acting with confidence on a stage for example. As Pressley and McCormick (2007) point out, the potential development of a person is subject to both genetics and environmental factors.

In the scope of schoolwork, a student will often exhibit a continuous development path. The teacher can never know if the development is from a force of nature or a force of nurture. However, it really does not matter. Students must be treated as individuals that have the capacity to grow and change; they may not grow and change is the same way as other students and they may not change at all. The teacher is one solitary force for change is a sea of opposing or complementary forces: biological development, family life, socio-economics, genetic pre-dispositions, the media, and (do not forget) friends (H1). It is for this reason that theatre is an excellent outlet for synthesizing the multiple influences in the life of a student. I will often say that taking drama is like taking every class – but seen through the lens of performance. I can influence a child in a limited amount of ways and rely on them to bring their preferences and aptitudes to light. The mark of great teaching includes the adaptation of content to the students abilities and ideas. Students come with a variety of pre-dispositions about theatre and performance. Some like performing every day and others would have nothing to do with it.

Strengths in the arts can be seen from both forces of nature and nurture. On the nature side, there is Shakespeare. According to records, which are spotty at best, he had little formal education. Yet, he could read and write exceedingly well. It is logical to surmise that he was self-taught to a large degree. Beyond this initial accomplishment, he became one of the most celebrated and produced writers of all time. Interestingly, his children could not read or write as far as we can tell. If his genius was from genetics, it was not passed on. Some students are in a similar boat. It is with these students that I must work to engage their continued development. They must not rest on their natural abilities; they excel with a more advanced Zone of Proximal Development. On the side of nurture, there are numerous accounts of students learning to play an instrument at an early age with a environment that nurtures that specific development. The Suzuki method of violin training is an excellent example of this effect. Students emerge after exhaustive practice with superior playing skills. One moment the teacher is interacting with a student that has innate (nature given) ability; the next moment, the teacher is building that student from the ground up through direct instruction (nature influence). With these students, I must work at the level of skill. Students apply their limited and slowly growing abilities to one skill at at time; this is the bulk of my work in Theatre Arts and English.

One trait of nature that has been identified is in brain development. The brain can be generalized into male and female. It is important to note that this is a generalization that has been scientifically observed; it does not apply to every individual. Girls are more verbal. Studies have shown this time after time. They use their verbal skills to build social connections and to communicate with their peers. It is an interpersonal style of socialization. Girls, and women, are better than boys at verbal memory tasks, verbal fluency, and with their speed of articulation. Consequently, it is understandable that girls have more aptitude for course work based in literature. Many elective courses in theatre arts are dominated by female students. The great irony is that female parts, especially as students get older, become difficult to find. As a teacher, especially teaching writing, I can encourage students to write for a world of inclusion where men are not the only dominant characters.

On the other hand, boys are steeped in one-up-man-ship. They give commands to each other and rely on a hierarchy to organize their social structure. They may use language to negotiate status but the relationship remains hierarchical. These same behaviors seen in a girl are far too often labeled as “bossy.” Boys that demonstrate the same aptitudes as girls can be withdrawn from the social group or placed at the bottom of the social pyramid. This later category of boy is often the type of student that I find in theatre arts. Though, I have had some very strong theatre arts students that are classified as the prototypical boy described here. With the former category, theatre can be tailored to address the social mechanics that these boys are accustomed to; with the others, the sociocultural approach, along with the female students, remains the best. This is yet another reason for embracing a differentiated approach to learning.

In the classroom, because no one can really predict an outcome with out trial and error, there must be experimentation with gender mixes. There may be subjects like science and math where as Medina (2008) points out girls will do better if they are isolated from the boys in the same class. However, there may also be a benefit to combining genders in a group and allowing the differences to support the educational process.

To effectively evaluate student progress, across classrooms, the standardized test has grown in importance. Funding and teacher performance reviews are based on these results. Students receive intervention education because of the results and students achieve further levels of academic success because of the tests. Yet, the standardized test is so specifically uniform that it cannot ‘measure’ the entire student.

A standardized test is an easy to evaluate measure of progress. It is for this reason that people outside of schools are in favor of them. They too would like, and deserve to, observe the progress of the current students. After all, students are one of the most valuable assets that this nation has. The results can indicate specific interventions for students and the process can be linked to manufacturing. Inputs (teachers, styles, curriculum, standards, funding, etc.) can be manipulated to achieve the desired outputs (superior student progress).
Secondly, and more importantly, standardized testing enjoys the support of many educators. This is not because teachers necessarily want students to become more uniform or standardized. However, standardized testing (both formal and informal) can provide student placement in intervention programs or allow a teacher to prescribe remedial work. This approach to standardized testing is especially effective in subjects that are less-constructivist, such as reading and math. Aptitude in these subjects can be tested with fact and skill based testing. However, in a more-constructivist course such as drama, the standardized test may not work. Students can be tested on standards established by the state. But the standards are often subjective in measure. For instance, students are asked by Washington State in the Essential Academic Learning Requirements, to apply their personal experience to a piece of art. It is difficult to apply a score to this type of learning standard.

Further, studies have shown that the brain works better in less-standard environments. Medina (2008), suggests that an ‘unstable’ environment is best suited for the brain because it matches evolutionary development. This environment does not need to be un-nurturing, un-empathetic, pro-suffering, or inhospitable for students. Rather, it embraces the diversified learning that every student is capable of achieving and lacks stability in the standardization. This environment allows students to be at the helm of their learning, just as they were when they were in Piaget’s first stage of development and learning through experimentation. It is an essential part of personalizing the information that a student is required to learn; this is a constructivist approach and more disciplines would benefit from its application because a teacher must increasingly engage the student to make personal connections to the material and integrate sensory learning styles; Mediana (2008) suggests that this will also assist in memorization of material for both the short and long term.

The standardized test is a simple representation of where the student was on a single day at a single time. It takes a teacher to see beyond the input and output of teaching that standardized testing looks for. Theatre arts are an excellent place for students to shine beyond the standardization: through personalized performances, creative choices being encouraged, and character growth being emphasized in equal weight to learning standards. These are all essential lessons I have learned from my classroom over the past several years.

Reflection on PRESENTING in CLASS